'Urine power' tests at UWE in Bristol are successful 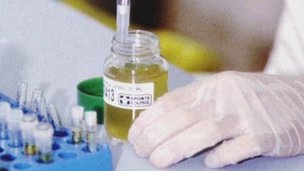 Research into producing electricity from urine has been carried out by scientists at the University of the West of England (UWE) in Bristol.

It is claimed the publication of a research paper into the viability of urine as a fuel for Microbial Fuel Cells (MFCs) is a world first.

They say tests have produced small amounts of energy, but more research could produce "useful" levels of power.

Dr Ioannis Ieropoulos said he was "excited by the potential of the work".

MFCs contain the same kind of bacteria that is found in soil, the human gut or waste water from sewers.

The bacteria anaerobically (without oxygen) respire just like any other living organism, and this process gives off electrons.

Those electrons are then passed through an electrode and a measure of electricity is generated.

Bacteria feed on the urine, which they effectively use as a fuel to continue to breathe and give off electrons.

"Urine is chemically rich in substances favourable to the MFCs," said Dr Ieropoulos.

"Through this study... we were able to show that by miniaturisation and multiplication of the number of MFCs into a stack and regulating the flow of urine, it may be possible to look at scales of use that have the potential to produce useful levels of power, for example in a domestic or small village setting."