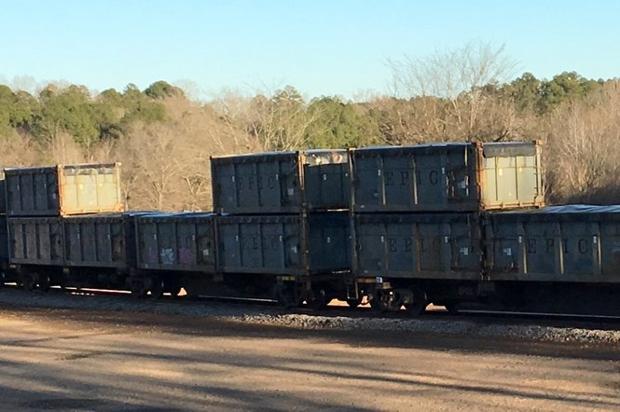 Several dozen train cars loaded with what appears to be sewage sludge from wastewater treatment plants in New York and New Jersey will be pulled back into a rail yard and off the tracks in north Birmingham, according to a statement from Birmingham Mayor Randall Woodfin's office.

According to photos and video posted to social media (featuring strong language), at least 80 train cars were parked on tracks Tuesday, near Finley Boulevard, between 27th Avenue North and 29th Avenue North.

The posting described a "death smell," emanating from the train cars, and said a local business had been getting calls about a possible dead body in the area due to the odor.

The train cars appear identical to shipments that have caused controversy and court battles in Jefferson and Walker Counties, as containers of sewage sludge from wastewater treatment plants in New York and New Jersey are carried by train to the greater Birmingham area for disposal at the Big Sky Environmental landfill in Adamsville.

Personnel at the landfill were not immediately available for comment as to whether the containers sitting on the train in Birmingham were in fact headed for the landfill.

Hundreds, perhaps thousands, of train cars full of the sewage sludge have been rolling into the landfill since early 2017, generating citizen complaints about odors and legal action from municipalities at every stop.

This Editorial is part of the Challenges in Environmental Health: Closing the Gap between Evidence and Regulations Collection.

By the time President Gerald Ford signed the United States Toxic Substances Control Act in the fall of 1976, tens of thousands of synthetic chemicals had entered world markets with no evidence of their safety. Ford’s signing statement described a law giving the Environmental Protection Agency (EPA) broad regulatory authority to require toxicity testing and reporting to determine whether the chemicals posed risks. “If a chemical is found to present a danger to health or the environment,” Ford promised, “appropriate regulatory action can be taken before it is too late to undo the damage.”

That’s not what happened. The 60,000-plus chemicals already in commerce were grandfathered into the law on the assumption that they were safe. And the EPA faced numerous hurdles, including pushback from the chemical industry, that undermined its ability to implement the law. Congress finally revised the law last year, with the Frank R. Lautenberg Chemical Safety for the 21st Century Act, to bolster the EPA’s regulatory authority. Over the decades that US policy on chemicals stagnated, scientists documented the damage whole classes of chemicals inflicted on living organisms and the environment that sustains them. Although we still have safety data on just a fraction of the 85,000-plus chemicals now approved for use in commerce, we know from field, wildlife, and epidemiology studies that exposures to environmental chemicals are ubiquitous. Hazardous chemicals enter the environment from the factories where they’re made and added to a dizzying array of consumer products—including mattresses, computers, cookware, and plastic baby cups to name a few—and from landfills overflowing with our cast-offs. They drift into homes from nearby agricultural fields and taint our drinking water and food. Today, hundreds of industrial chemicals contaminate the blood and urine of nearly every person tested, in the US and beyond.

In the decades since Ford promised a robust policy to regulate potentially hazardous chemicals, evidence has emerged that chemicals in widespread use can cause cancer and other chronic diseases, damage reproductive systems, and harm developing brains at low levels of exposure once believed to be harmless. Such exposures pose unique risks to children at critical windows of development—risks that existing regulations fail to consider. To address these issues, PLOS Biology is publishing a special collection of seven articles, Challenges in Environmental Health: Closing the Gap between Evidence and Regulations, that focus on US chemical policy [1].

An informal committee of neighbors in the Mill Canyon area northeast of Davenport, WA is calling it a victory: They didn’t want sewage sludge to be applied to agricultural lands in their watershed. They fought hard against it. Now, due to their efforts, sludge will not be applied to lands immediately adjacent to the canyon where they live, according to a newly approved permit, issued December 13th by the Department of Ecology.

The scale of the win for the committee is significant. The total acreage that will have sludge applied is reduced from the original 887.45 acres to 157.77 acres in the final permit. The original application indicated sewage sludge would have been applied less than one mile from Mill Canyon residents’ farms, gardens and wells and less than half a mile from the source of a private spring used for drinking water that figured prominently in comments sent to the Department of Ecology citing concerns over potential contamination from the sludge. With the approved permit, the closest to the canyon any sludge will be applied is over 5 miles away.

Pressure is coming from the state and now the federal levels to get toxic sludge cleaned up in Fort Myers.

Friday marked the deadline for the city to hand over test results from recent groundwater tests at six monitoring wells.

NBC2 received the leaked results from attorneys representing residents living in and around South Street.

Arsenic levels five times what's considered safe was discovered in one of the six wells tested, with other wells also testing high for the toxic material.

"Just the idea that someone in government knows what's going on and not doing anything about it and not taking steps to clear it up, that's the most hurtful thing ever," Barbara Parker of Fort Myers said.

In his letter to the EPA, Nelson argued that "no one should have to wait years for a known environmental hazard in their neighborhood to be cleaned up."

Nelson updated EPA administrator Scott Pruitt on the latest test results and said if these results are accurate, "residents should not have to wait months for all testing to be completed when answers to their questions already exist."

Noting the city's lack of communication with FDEP, Nelson told Pruitt the time to intervene is now and neighbors agree.

"We shouldn't be allowed to just go on living as if everything is okay," Nelson said.

Three North Carolina landfills have the green light to collect liquid that leaks from trash and spray it into the air.

The disposal method has drawn criticism from environmentalists and some neighbors, but it could become more common if the legislature overrides a veto by Gov. Roy Cooper.

The state Department of Environmental Quality approved the spraying process for the three landfills, plus a coal-ash dump in Chatham County. The permits can be used for 90 days.

The bill passed by the legislature and vetoed in June by Cooper would require the department to approve spraying at lined landfills where wastewater is prevented from escaping into the soil. The agency would also be allowed to consider the process for unlined landfills. Certain landfills would be allowed to spray without a permit.

A pumping system takes the water from where it is stored and turns it into mist that fans direct to a contained area of the landfill. The idea is that water will evaporate and the contaminated particles fall back into the landfill.

The process promises to save millions of dollars for waste management companies in disposal costs, but has drawn questions about how the spray will be contained and whether it will drift through the air into surrounding communities.

Bobbie Mendenhall, who lives with her husband less than a quarter-mile from the Brickhaven Mine where coal ash is dumped, worries that contaminants will end up in the air her family breathes.

“I just think it’s ridiculous,” Mendenhall said. “To me they are just spraying toxic stuff into the air and ground.”

Miami Waterkeeper has discovered an ignored outfall sewage leak in Biscayne Bay, affecting our oceans, wildlife, and the health and safety of the public. Miami Waterkeeper

A massive ocean outfall pipe intended to dump partially treated human waste in deep water far from Miami has instead been leaking in shallow water within a mile of tony Fisher Island for at least a year, an environmental group said Monday.

A Miami Waterkeeper diver sent to investigate the leak after a citizen tipped off the group recorded cloudy sewage spewing from the underground pipe earlier this month, near schools of fish and coral.

It’s not clear how much sewage is coming from the leak, but the pipe itself is capable of pumping 143 million gallons a day. On Monday, Miami Waterkeeper filed a notice of intent to sue in 60 days that cites Miami-Dade County emails saying the pipe had not been inspected in more than a decade.

“It’s extremely disappointing that the county would fail to act on this information and to allow this leak to occur for close to a year at this point,” said Waterkeeper Executive Director Rachel Silverstein. “It’s even more disappointing to find out how long its been since these outfall pipes have been inspected.”