Researchers have found Puget Sound chinook are picking up our drugs as they swim through effluent of wastewater-treatment plants, and it may be hurting their survival.

Antidepressants. Diabetes drugs. High-blood-pressure medication. Puget Sound chinook are doing our drugs, and it may be hurting them, new research shows.

The metabolic disturbance evident in the fish from human drugs was severe enough that it may result not only in failure to thrive but early mortality and an inability to compete for food and habitat.

The response was particularly pronounced in Puget Sound chinook — a threatened species many other animals depend on for their survival, including critically endangered southern-resident killer whales.

The research built on earlier work, published in 2016, that showed juvenile Puget Sound chinook and Pacific staghorn sculpin are packing drugs including Prozac, Advil, Benadryl and Lipitor among dozens of other drugs present in tainted wastewater discharge.

It was a sunny Sunday afternoon in late October 2014. My husband and I were enjoying a soft shell crab sandwich at the Blue Crab Festival in West Point, Va., just a few miles from our home. Local arts and crafts were on the display, the Main Street was filled with people, cotton candy carts, draft beer stands, merry-go-round, the usual.

A lady with the Sierra Club baseball hat and a handful of flyers came over and asked if we know about the problem with biosolids.

“Biosolids?” we both asked in unison. “What’s that?”

“It’s a municipal sewage sludge and industrial waste that is applied to the farmland as a fertilizer. A company called Synagro applied for a permit to spread industrial waste on 17,000 acres in our area over the next 10 years. This practice is mostly unmonitored and the permit is very likely to be granted,” she answered, frowning.

“WHAT?!” we screamed, in unison again, and looked at each other in horror. This woman is crazy! This just can’t be! 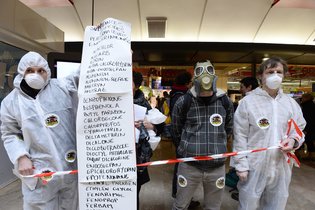 IN recent weeks, two major medical organizations have issued independent warnings about toxic chemicals in products all around us. Unregulated substances, they say, are sometimes linked to breast and prostate cancer, genital deformities, obesity, diabetes and infertility.

The warnings are a reminder that the chemical industry has inherited the mantle of Big Tobacco, minimizing science and resisting regulation in ways that cause devastating harm to unsuspecting citizens.

In the 1950s, researchers were finding that cigarettes caused cancer, but the political system lagged in responding. Now the same thing is happening with toxic chemicals. A Baltimore company has withdrawn plans to apply fertilizer made from human sewage sludge on farms in Upper Mount Bethel Township, according to the Pennsylvania Department of Environmental Protection.

"They're just not going to apply at this time," DEP spokeswoman Colleen Connolly said. "They can reapply to do it again in spring."

Township residents organized as Sludge Free UMBT challenged the DEP's approval, granted Dec. 23, 2013, for Synagro Mid-Atlantic Inc. to apply the biosolids fertilizer on the Potomac, Sunrise and Stone Church farms. All three properties are owned by Ron Angle and farmed by Paul Smith through a lease. A new study conducted on zucchini plants suggests that pharmaceuticals in biosolid fertilizers could be harming your veggies.

Fertilizing crops with biosolids—a combination of human, commercial, and industrial wastes otherwise known by critics as “sewage sludge”—is a common but controversial practice.

On the one hand, municipalities argue, it is much more environmentally sound to recycle nutrients that would otherwise be sent to landfills. The use of these fertilizers also cuts down on the amount of man-made fertilizers needed to boost crops and keep soils healthy.

On the other hand, biosolids have often raised safety concerns, and the quality and safety can vary depending how they’ve been treated. The U.S. Department of Agriculture’s (USDA) National Organic Standards prohibit their use in organic agriculture because of concerns over contamination from hormones, steroids, and pathogens. And there has been a passionate debate over whether biosolids are safe to use because of the risk of contamination.

Despite the fact that there are many substances found in biosolids, the U.S. Environmental Protection Agency (EPA) only regulates a few including pathogens and heavy metals. And the agency has no control over the level of pharmaceuticals in biosolids or in wastewater.